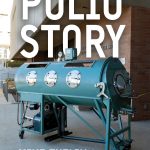 Although parts of the historical record remain speculative, indications of poliomyelitis as a disease entity extend as far back as antiquity. Skeletal surveys and studies of Egyptian mummies and carved stele reveal physical deformities consistent with polio. In his history of the Peloponnesian War, Thucydides describes a great plague that struck Athens. The Greek historian’s account is significant not because the symptoms he catalogs were determinative for one disease over another, but rather for his observation of those who recovered were rarely sickened a second time – an unknown recognition of the role immunity plays in disease. Among accounts in the Gospels are descriptions of paralytics afflicted with a disease outwardly similar to polio being cured by Jesus. Renaissance painters Bosch, Brueghel and Callot depict individuals who nothing so much with their withered and contorted limbs resemble those crippled by polio. By the seventeenth and eighteenth centuries, reports of headache, fever, muscle weakness, and paralysis throughout Europe, Asia, and India begin to provide the first glimpses of the true nature and extent of the disease. The written accounts (Treatise on Diseases of Children, 1789) of the English physician and surgeon Michael Underwood are revelatory as they furnish the first clinical descriptions of polio noted in the medical literature. It was not until the early nineteenth century, however, as scientific methodology was starting to be systematically applied, that polio as a disease entity begins to come into focus.

The German orthopedist Jakob Heine (1800-1879) in the course of his examination of patients with bone deformities, observed an associated instance of flaccid paralysis in a number of his young patients. In 1840, Heine published a 78-page study where he separated the clinical presentation of 14 paraplegics, 7 hemiplegics, and 6 partial paralytics he considered unique. Infantile spinal paralysis thus entered the medical lexicon and popular consciousness. In 1870, French neurologist Jean-Martin Charcot (1825-1893) and his colleague, Alix Joffroy (1844-1908), published a paper based upon their postmortem results of a thirty-nine-year-old female. Microscopic examination of the spinal cord revealed the shrunken and scarred nature of both the white and grey matter, with a particular loss of substance in the anterior horn of the gray matter. The flaccid paralysis Heine clinically observed Charcot and Joffroy were able to pinpoint anatomically. Twenty years later, Oskar Medin (1847-1927), a Swedish pediatrician published his own detailed study of the signs and symptoms, inferred epidemic characteristics, and pathophysiology of the disease that would eponymously link his name with Heine’s describing four types of neuromuscular dysfunction. Adolf von Strumpell and John Rissler, contemporaries of the latter, further contributed to understanding the neurological basis of the disease. But it was Ivar Wickman (1872-1914), a student of Medin, who was to provide proof of the infectious nature of the disease in his published studies (1907,1911) of the large polio epidemic that swept through Scandinavia in 1905.

Wickman’s detailed investigations in and around the parishes of Traestena, Sweden identified two factors critical for the spread of polio: seasonal fluctuations as the transmission chain and person-to-person contact as the disease driver. Eerily foreshadowing Joan Ogden’s own story, Wickman’s narrative of the case of a three-year-old boy who had travelled that July with his mother to a village where grandparents lived forms a compelling comparison. Taken ill “with the usual symptoms,” Wickman noted the rapid spread of the infection to household contacts upon the sick child’s return home and its subsequent radiating out into the surrounding countryside later in August. Wickman’s meticulous research marks one of the first evidence-based efforts to analyze field data in order to establish disease incidence and prevalence and most certainly represents the first – albeit rudimentary – example of systematic contact tracing that was later to become a vital tool of public health surveillance.

As Wickman’s epidemiological monitoring marked a significant step in unraveling some of the mystery surrounding polio, so too, was Karl Landsteiner and Erwin Popper’s discovery of the etiological agent of the disease at nearly the same time (1908). Landsteiner had already made a name for himself with his discovery of the ABO human blood group antigens in 1901 (for which he would be awarded a Nobel Prize). Popper, whose professional accomplishments as a pediatrician were much more modest, was Landsteiner’s colleague at the Wilhelminenspital in Vienna. The pursuit of a bacterium as the causative agent of poliomyelitis at the time Landsteiner and Popper began their collaboration had all but dead-ended. Likewise attempts to transmit the disease to non-primate laboratory animals.

Viruses, recently discovered and little understood, posed a daunting challenge to isolate much less identify given the extant laboratory techniques which at the time were largely limited to sequential inoculation from animal-to-animal and serial dilution. Almost by chance, the discovery came about when a nine-year-old boy, with an otherwise quotidian medical history was admitted to hospital. A sudden onset of flu-like symptoms was observed. The subsequent sequelae of muscular paralysis and severe respiratory distress resulted in the boy’s death on the fourth day of hospitalization. Landsteiner and Popper performed an autopsy and noted the cytopathic nature in the gray matter of the child’s brain that was suggestive of poliomyelitis. Seeking to identify the infectious agent, Landsteiner and Popper prepared a homogenate of the boy’s spinal cord and after injecting rabbits, guinea pigs, and mice produced no ill effects, injected the suspension intraperitoneally into two Old World monkeys. Both animals developed histopathological lesions on the spinal cord, medulla, pons, and brainstem identical to those observed in human cases of poliomyelitis. When the suspect particle passed through the Berkefelt filter candle, it became obvious to both men they had isolated something much smaller, much simpler and for the moment, impenetrable – the poliovirus.

Within a year of Landsteiner and Popper’s discovery, others researching the disease provided additional insights. In their landmark paper, The Transmission of Acute Poliomyelitis to Monkeys (1909), Simon Flexner (Director of the Rockefeller Institute for Medical Research) and Paul A. Lewis showed the presence of antibodies in convalescent monkey serum and later, Landsteiner, this time working with Constantin Levaditi from the Pasteur Institute, elicited the same results in man. These and other contemporaneous studies made one thing clear, although present in neurologic tissue and able to be passaged to select primate species by experimental means, the poliovirus was a strictly human pathogen.